Nearly hidden away on an obscure plot of land in Montpelier, Vermont is a memorial to the 'Challenger Seven'. These are the astronauts who died on January 28, 1986 when NASA's space shuttle Challenger exploded 73 seconds into launch. The seven included the first civilian astronaut, Christa McAuliffe, a school teacher from neighboring New Hampshire.

It was a particularly awful disaster because students and teachers from all over the United States and beyond were inspired by Ms. McAuliffe, including our local science classes. Many children watched on live television when seconds into the launch excitement turned to disbelief and horror as the shuttle exploded. Retired Montpelier science teacher Roger Crowley who was watching with his students recalls, “It was the most difficult time I’ve ever had in the classroom.”

My class was part of the Teacher in Space program and we communicated with Christa many times. We were doing experiments in the classroom with tomato seeds that had been in space. It was interesting how some parents thought the seeds and tomatoes we grew were harmful with alien stuff. Curious even after telling them that they were sealed while in space and the experiments had to do with the effects of gravity on growth. Anyway, we ate the tomatoes. My room was full that day of students, parents, and guests watching the Challenger take off.

As a member of the Montpelier Public Art Commission, one of my duties is to assess our current public art. When I got to this memorial, a beautiful granite work of art in a place that people can’t get to, it called out to me to be moved to a new location where parking is available, walking is safe, and people can get up close and be as moved as I am.

My fellow Commission members agreed and so began an adventure!

First step, who owns it? Turns out no one. The National Life Insurance Company, now the National Life Group, donated the land where it sits. The Roselli family donated it. The City installed it. No records. No paperwork. The City, school, and National Life agreed to hand it over to our Commission.

Thanks to readers of the Front Porch Forum here's what we now know:

- Daniel Roselli designed the monument. He died of cancer in 2004 at the age of 49 and is buried next to his parents in Green Mount Cemetery. "Danny deserves all the credit on this. He…got everything done," remarked his father.

- Vic hired Ed Epstein, who still resides locally, to etch the image on the memorial which includes two slabs of granite, one light ‘Barre Gray’ from a local quarry and the other ‘India Dark’ which was imported.

- The City raised money to design and plant a small park surrounding the memorial which is now long gone.

- The National Life Group donated the land where it now sits and took excellent care of it.

- A well-attended dedication was held in the fall of 1986 which included local school children and teachers. Many Front Porch Forum readers remember the hot day and even a few kids fainting.

From the beginning our Commission intended that no taxpayer funds be involved in this project, particularly when so many are financially stressed by COVID. To our tremendous appreciation, the National Life Group offered, unsolicited, to cover all the costs. Several Front Porch Forum readers have also offered financial aid. Our City Counselor, Conor Casey, offered to help with any snags.

The monument is in excellent condition, though it needs a good cleaning which I’ll donate – my business is art restoration with a sideline in monument cleaning.

The project entails carefully removing the memorial and its foundation, pouring a new one in a more accessible location, and reinstalling it.

Matthew Calcagni and his brothers who own GCB Corp (Granite Company of Barre), with many decades of experience in monument installation, will do the work.

The plan is to move it when the ground is solid enough for heavy equipment, so as not to disturb an underground culvert next to the memorial.


The public will be canvassed about the best new location with accessibility and a measure of security to reduce the risk of vandalism. For extra protection, I'll coat the monument so that any 'tagging' (art industry lingo for graffiti) is easily removed.

Three beautiful locations have been mentioned: our 'Peace Park', anywhere on the high school grounds, or anywhere next to a new stretch of the bike path between the center of Montpelier and the new Transit Center.

So far, only one person objects to moving it. His reasoning is sound: the current location is so obscure it discourages vandalism. Can’t guarantee a graffiti-free location but we do promise that the security concern is front and center.

Mysteries remained, the apples arranged on the top of the memorial from time to time, and why was Dan so passionate about this? He had no kids. He was not a teacher or coach or otherwise involved with the school. He was busy learning his parents’ granite business which he would soon take over.

So why did he do this? One of his closest friends, Doug Zorzi, emailed me to explain that Dan was truly a rare kind of person who was not only deeply moved by the disaster, but doubly moved by the added tragedy that so many young people witnessed it first-hand.

After Dan died a high school scholarship fund was established in his family’s name.

A gentleman recently contacted me to solve the apple mystery - why apples are found atop the monument every year. He explained that local residents still honor Ms. McAuliffe by bringing an apple for the teacher. Coincidentally, the monument now sits in front of an apple tree. Wait, there are no coincidences!

The monument has been placed in its new location and with a nice granite platform. It's also been cleaned and coated. And a brief informal re-dedication ceremony hosted by Montpelier Mayor Anne Watkins occured on a rainy Thursday, November 18 at 4pm. Several dozen townspeople attended, including Dan's friend Doug.

About that beautiful granite platform - that was not part of the original monument. But here is just one example of many unexpected positive experiences that happened throughout this project! Mat Calcagni, one of the owners of GCB which removed the monument from its old location, then stored it while we all finished processing permits and permissions for the new location, then arranged the excavating of a new foundation and the concrete pouring and the Dig Safe approval, said to me as his brother sat in the excavator digging the new hole, "Bob, how about a platform of granite - it would look so much nicer and protect the monument from accidental scraping by lawn equipment?" I looked at him for a moment in awe. I realized that his idea would perfectly frame the monument as well as protect it - the monument would look even better - but I'm the one with the art experience! That should have been my idea! All I could say in response was, humbly, "Brilliant! Let's do it!" Then a problem arose. We were about to pour the concrete and it needed two days to set before we placed the monument on it. No way we could order a thick piece of granite to be cut in the dimensions we needed and delivered in two days. It normally takes a couple weeks and now with Covid it would be months! Then Mat said that he knew people who owed him some favors so he'd see what he could do. He phone me a couple hours later to say he'd have the slab delivered the next day!

While I was cleaning it, a man introduced himself as a retired National Life employee. For over 20 years he drove by the old site of the monument twice a day on his commute, but never noticed the etching, never got up close to see the names, never knew what it was all about. He was thankful that we moved it so he and others can now stop and recall for a moment the supreme sacrifice of these seven men and women so honored by this beautiful work of art. 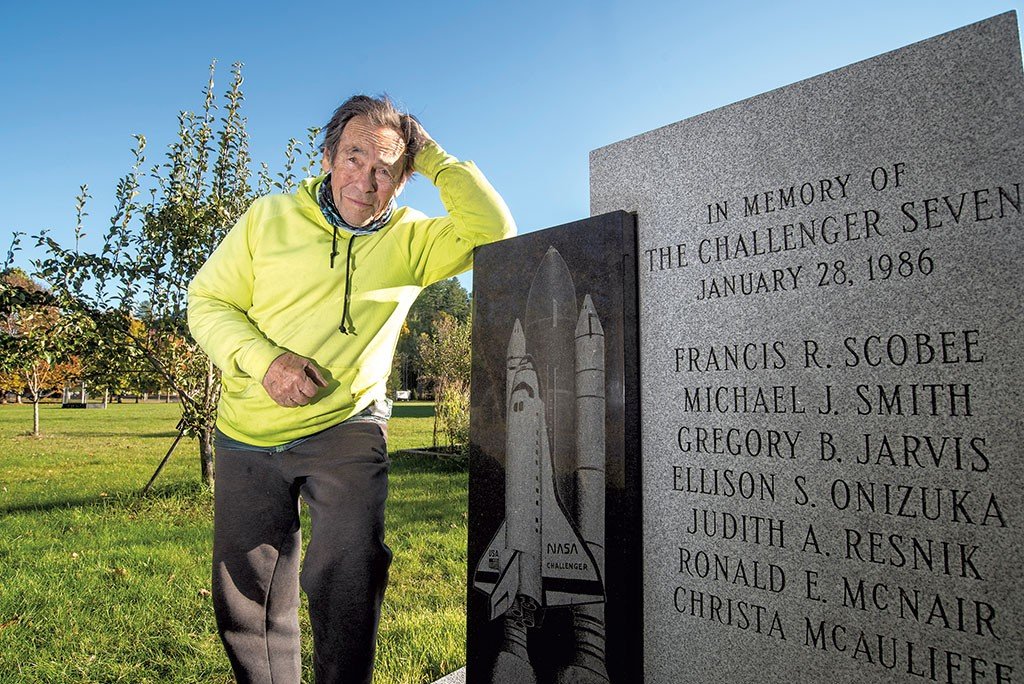 Ed Epstein at the re-dedication of the Challenger Memorial. Photo by Jeb Wallace-Brodeur. Courtesy Seven Days. 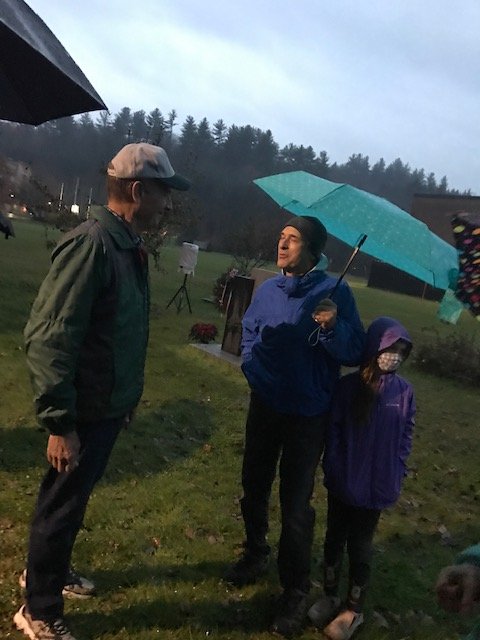 Doug Zorzi introduced himself to me at the rededication. 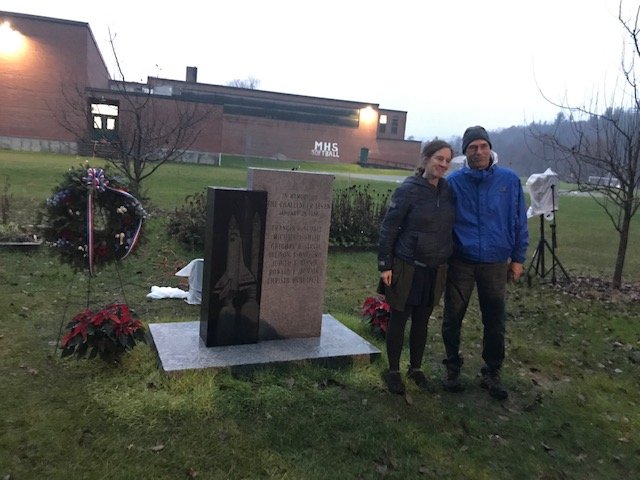 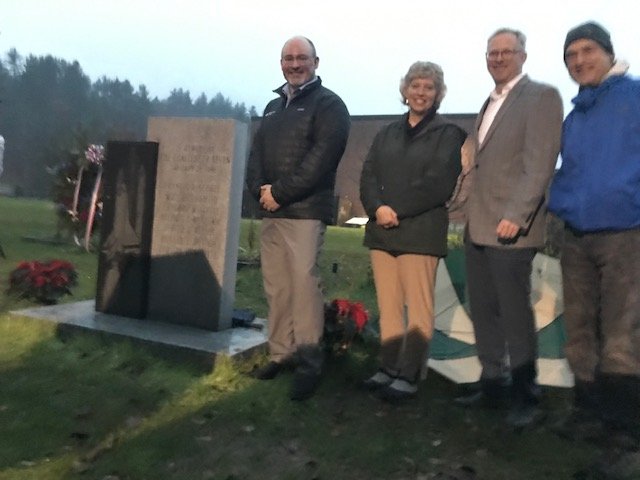 Scott Rogers and friends from the National Life Group